The homes of Cartegena are dressed in tropical and flowering vines. Door knockers or Aldabas reflected the status of family in residence. They spoke to the families social and economic status without saying a word. The door knocker came about in the middle ages when most people could not read or write. The pictorial images were the ultimate status symbol. Although today they are merely ornamental, they hearken back to the family’s status and wealth.

Nautical motifs that feature creatures of the sea such as fish and mermaids were used by families that made their living by the sea. Usually as merchants importing goods into the New World or traders. 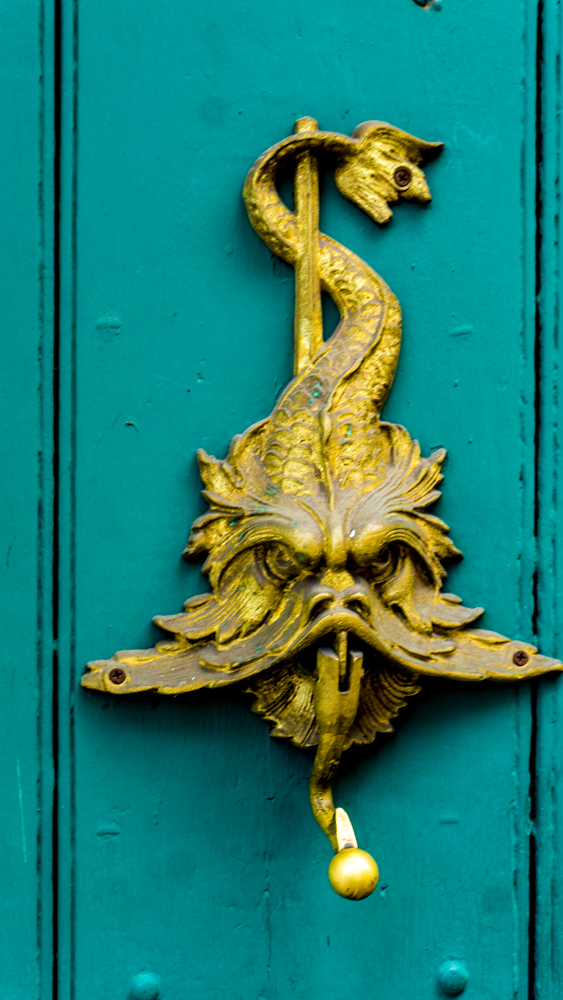 Lions were the symbol of the military. It is the epitome of strength, pride and power. The protectors of the city lived behind these doors. 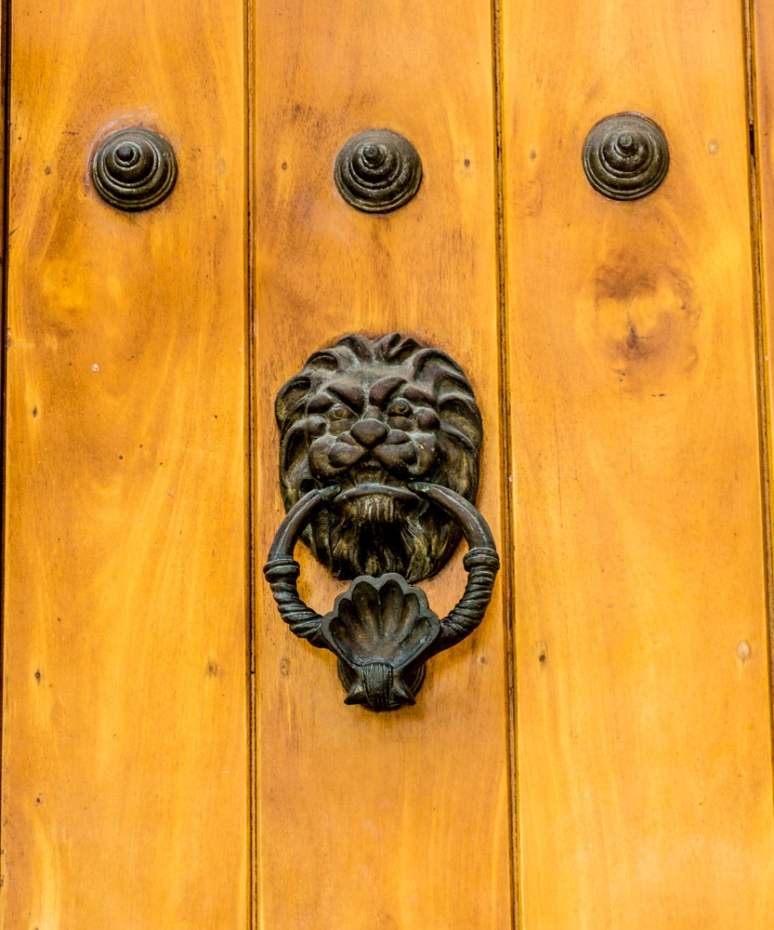 Aldabas shaped like lizards refer back to the country’s royalty. Families with these often were members of royal family or could produce a connetion to the royals. 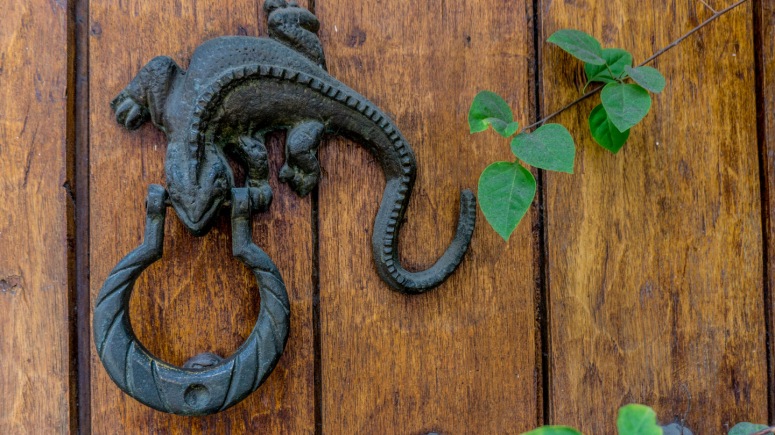 Both the size of the knocker and the material that it was made of, were also important indicators of the family’s status. The actual meaning of the different styles comes into question quite often. Where some say the Lion represents the military, others say it is meant for teachers. And if the lizard is truly a symbol of royalty, there must have been a huge royal family living in Cartegena based on the dozens of lizard aldabas that I saw. Any way you look at them, the aldabas are beautiful bits of decoration on some wonderful homes.

Head towards the clock tower and you will find your way to the Ciudad Vieja or Old Town. The Old Town and Ciudad Murallada, the Walled City, lie just behind.  La Puerta y la Torre del Reloj is your entry into this amazing city.

The Plaza of the Carriages (Plaza de los Cloches) next to the clock tower, was the site of the original slave market. Slaves were brought into the New World through Cartegena and Veracruz, Mexico. And yes, you can pick up a carriage ride in the Plaza de los Coches. 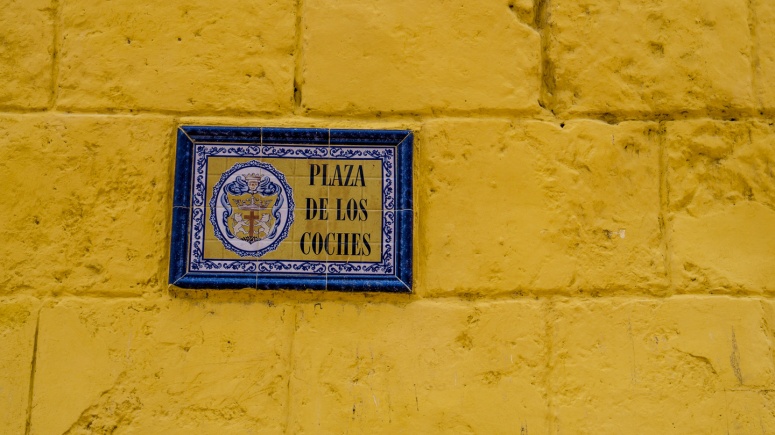 If you’re on the hunt for some vintage record albums or a used copy of the South Beach Diet, this market is just for you.

Be sure to check out the street vendors and maybe pick up a Panama hat to keep you cool. The heat and humidity are overwhelming and most people stay away during the heat of the afternoon. 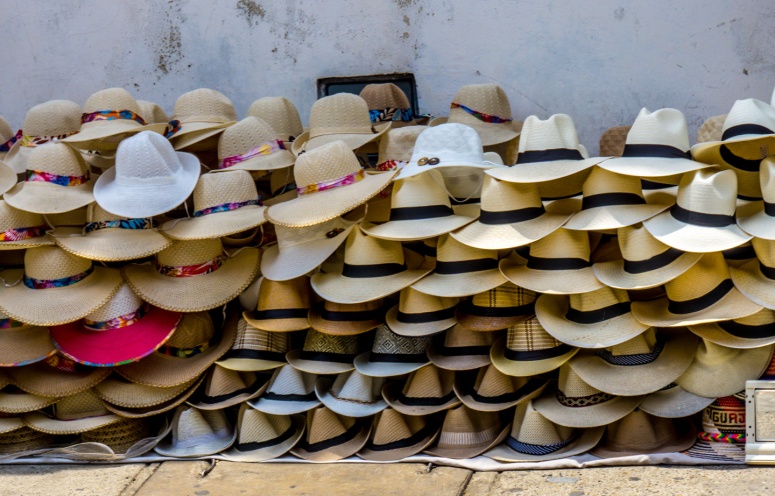 A towering statue of Christopher Columbus stands in the Plaza de la Aruanda. Columbus explored the coast of Panama, which was part of Columbia on his fourth voyage of discovery. 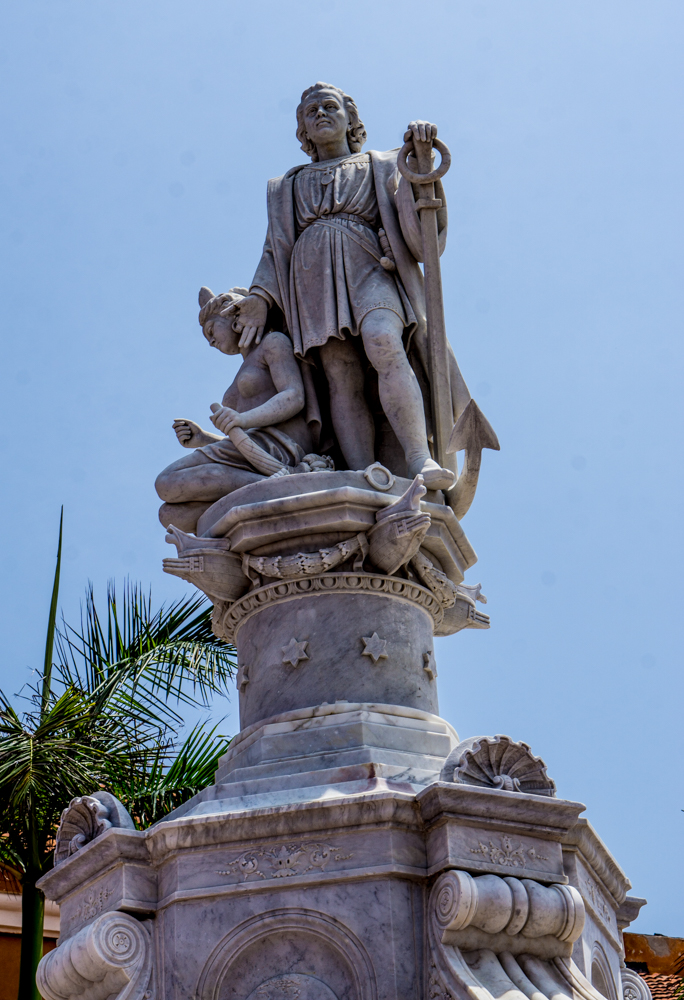 Modern art sculptures adorn the streets and plazas. This palenquera was one of several sculptures in the Plaza San Pedro Claver.

The Church of San Pedro Claver was built in the early 17th century. Saint Peter Claver was known as the slave of slaves by his Jesuit brethren. Unlike his brothers, Claver did not support Slavery and chose to minister to the many slaves brought through Cartegena. He would meet the slave ships before the human cargo was unloaded so that he could be the first and only friendly face they saw in the New World. San Pedro Claver was the first saint canonized in the New World. 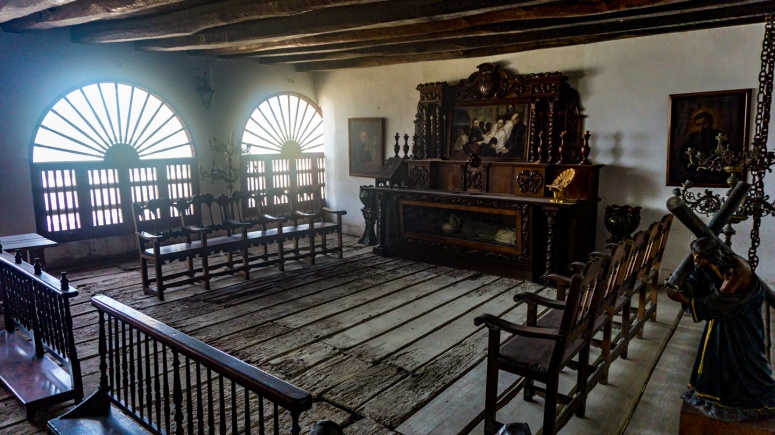 The $5 entry fee was well worth it to get out of the hot sun for a half hour or so. The church grounds feature heavy wood furniture offset by the gleaming white washed walls.

The altar is dedicated to San Pedro and his remains are visible underneath. You can check out his skull if you want to get up close and personal. 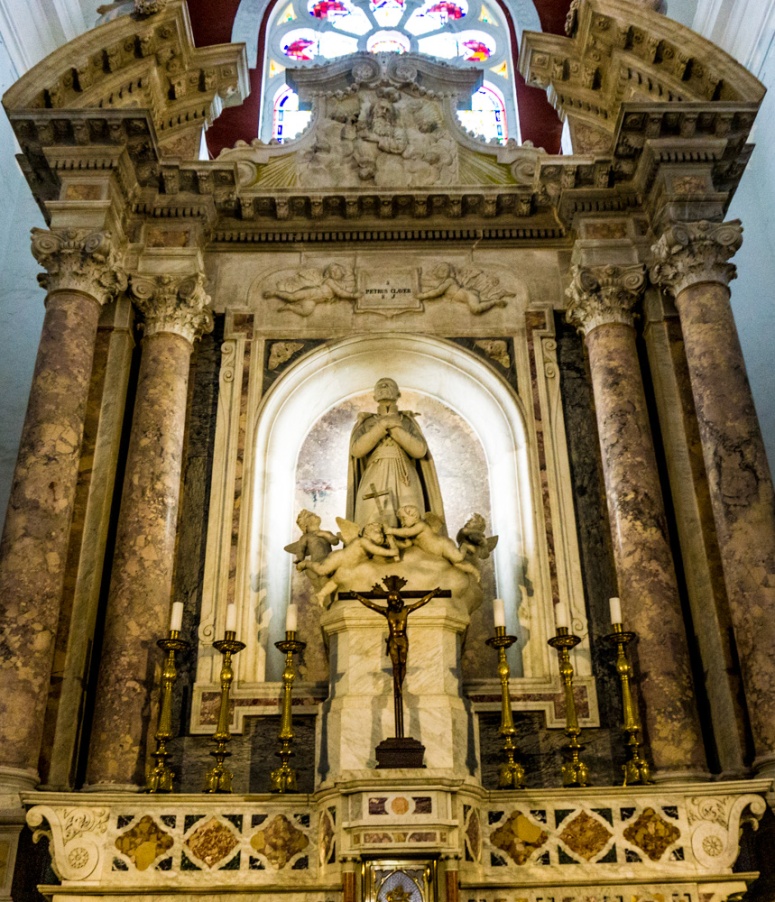 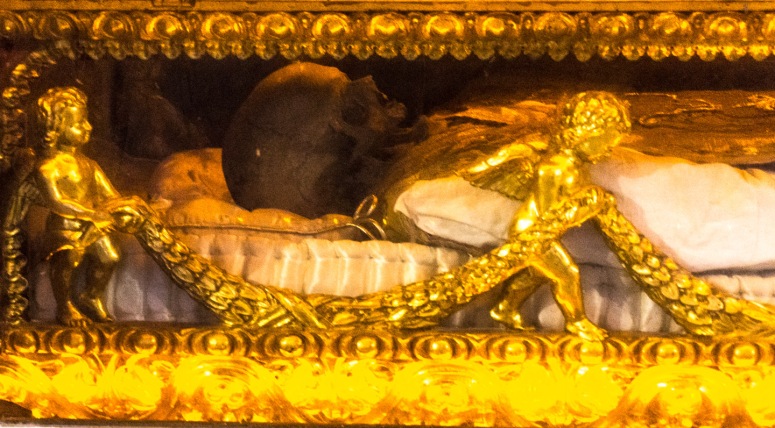 The mausoleum in the back of the cloister houses more recent parishioners. 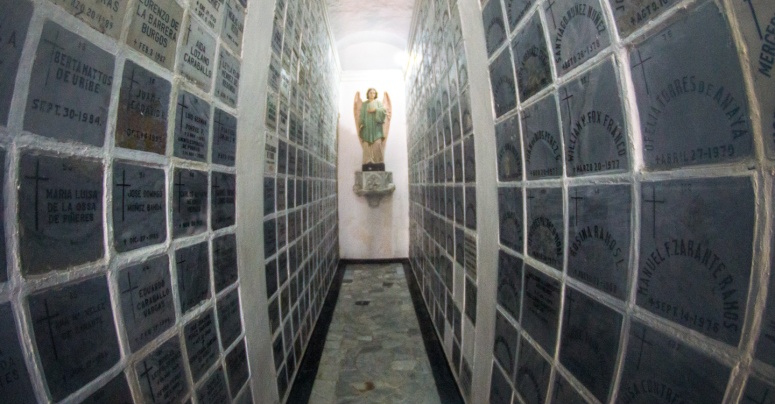 The Church of San Pedro Claver

It has been called by some ‘The Queen of The Caribbean Coast’. Cartagena, Columbia is a bright maze of cobblestone streets. Just inside the ancient city walls, you can find used booksellers. The brutal heat and humidity were overwhelming but wandering the neighborhoods was not to be missed.

The thick walls of Las Murallas surround the Old Town. Originally built to keep out enemies, Las Murallas is in remarkable condition.  Even though there are numerous guide books on Cartagena, it is better to just wander about. Colorful buildings line the streets with their open patios and balconies.

Street vendors sell a variety of fresh fruits, ranging from coconuts to papayas and bananas. It’s safe to try some of the produce, the water in the larger cities is safe to drink and the fruits and vegetables are also safe.

You are sure to encounter some of the brightly dressed Palenqueras. These black women were originally from San Basillo de Palenque, a small village located in southeast of Cartagena. San Basillo de Palenque was founded by runaway African slaves and is one of the first free towns in the Americas. Tourists snap up pictures of the beautifully dressed women with bowls of fruit on their heads. But beware, if you do not tip them first, they will hiss at you and hide their faces.

For a dollar each, I got some great shots, but as soon as the cameras stop snapping, the smiles disappear from their faces. Even though they are used to being the center of attention, they really are tired poor women who have to sit all day in the sun and heat to make some sort of living.

As colorful as the tropical parrots that freely fly around, the buildings are dressed in bright yellows, blues, reds and oranges. Cartagena was one of Spain’s important ports along with San Juan and Havana. 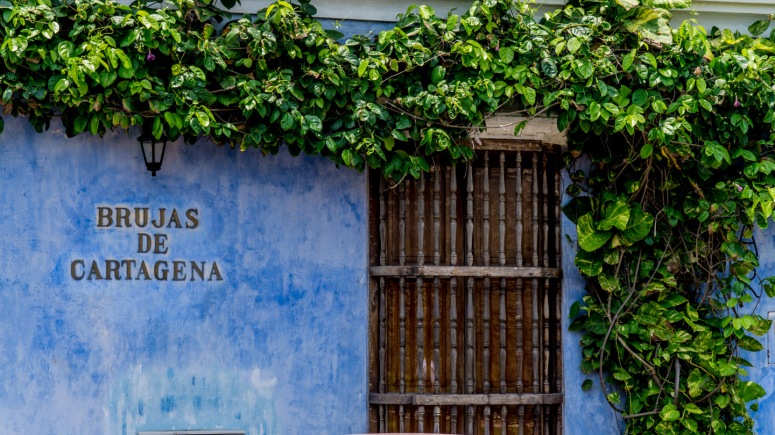