Visiting the Queen of Denmark

Amalienborg Palace is one of several architectural and cultural masterpieces in Copenhagen.  The palace is still the residence of Denmark’s Royal Family. A statue of King Frederik V dating from 1771 stands in the forecourt. The palace is made up of four identical buildings. These are Christian VII’s Palace or Moltke’s Palace, a guest residence, Frederik VIII’s Palace or Brockdorff’s Palace, home of the Crown Prince family, Christian IX’s Palace or Schack’s Palace, home of Queen Margreth and Prince Consort and Christian VIII’s Palace or Levetzau’ Palace, used as guest palace for Prince Joachim and Princess Benedikte.

Although you can’t drop in on to visit the Queen, you can visit one of the buildings where 4 kings of the House of Glucksborg who ruled from 1863 through 1972 resided. Among the rooms you can see are the study and drawing room of Christian IX and Queen Louise.  Queen Louise was the great-great-grandmother of today’s Queen Margreth and through marriage allowed Prince Christian IX to ascend the throne.  Queen Louise made sure that all six of her children married well and Queen Louise and King Christian IX became known as Europe’s Parents-In-Law.  Four of their children sat in the thrones of Denmark, Greece, England, and Russia.

The study of Frederik VIII is an approximation of the way it looked. After the King’s death in 1912, his belongings were given away to family and friends. The heavy wooden furniture and faux leather walls make it a very masculine space.

The private salon of Queen Louise is full of Victorian treasures and personal souvenirs. 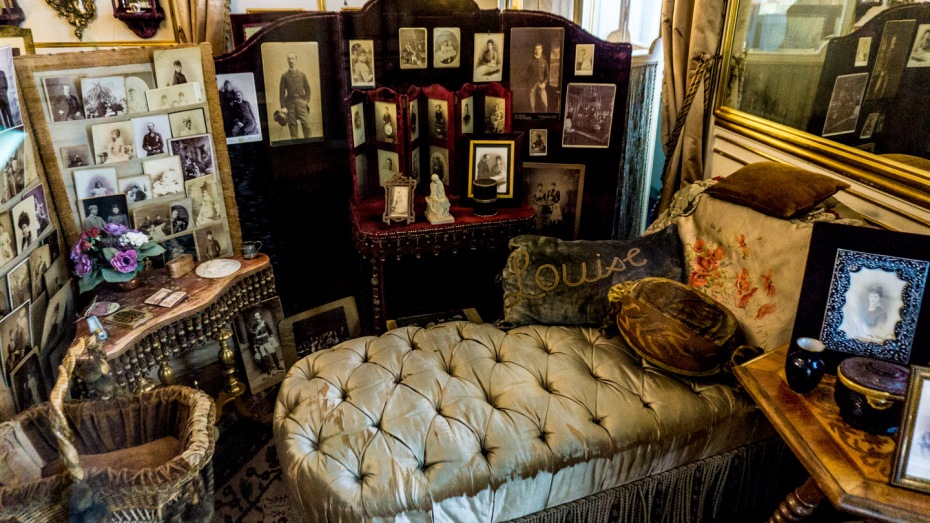 Christian IX’s study is decorated with framed photos of family. During Christian IX’s time, photographs were a new sensation and expensive. They were a status symbol and also showed how seriously Christian IX took his fame as Europe’s Father-In-Law.